This significant collection, comprising manuscript music for the Northumberland small-pipes, manuscript documents, printed music and newspaper cuttings, was collated by J W Fenwick during the second half of the 19thC. The manuscript music includes tunes and arrangements contributed by pipers in North Shields who were drawing on early sources, and who were themselves at the heart of a piping tradition, and it provides a new and reliable insight into an early 19thC repertoire.

JAMES WILLIAM FENWICK was a piper, and an Honorary Playing Member of the Northumbrian Small-Pipes Society which existed in the 1890s, and a member of their committee.

A tailor by profession, James was probably born c.1823 at Hetton-le-Hole, where his father William was an ironfounder. The family subsequently moved to North Shields and by 1841 was living in Milburn Place. It is possible, even likely, that William had moved to North Shields to work in one of the forges or foundries in the Mount Pleasant area just north-east of Milburn Place, near the shipyards on the riverside at the west end of North Shields. At age eighteen James was listed in the 1841 census as a tailor, in a household consisting of his father and mother, and Sarah, and elderly relative.

Milburn Place was an estate of three streets situated immediately opposite the south end of Dortwick Street. The Reid family lived in Dortwick Street until 1852. Given his lasting interest and competence in piping, it is possible that at this time James Fenwick knew, and may have been taught by, Robert and/or James Reid. He certainly corresponded with James Reid and his sister Elizabeth Oliver, also a piper, whilst compiling his collection of music.

James Fenwick is listed in the 1851 census as a tailor and publican (but probably not the landlord) at the Phoenix Inn in Bedford Street, North Shields, along with his wife Margaret A.

Positive identifications are uncertain during the 1860s and 70s. It seems likely that in 1861 James and Margaret were living with her family in Northumberland Place in Newcastle. This record is, however, anomalous in that a James W Fenwick, a tailor, born in County Durham, is listed as son-in-law living with the Davison family and one of their two daughters is Margaret Ann, married, but she is still listed in the census as Margaret Ann Davison. No more appropriate record has been found to date.

Margaret may be the Margaret Davison who is recorded as having died in 1865, and in 1871 a James W Fenwick is recorded as a lodger elsewhere in the same area, suggesting that by this time he had moved out of the Davison’s home. This record is also anomalous in that the place of birth for this J W Fenwick, a tailor, is given as Alnwick; again, though, no more appropriate record has been found.

By 1881 James and his second wife, Emma, and their family were living in Elswick, before moving to Lawton Street in Rye Hill by 1891. Their first child had been born in 1873, which suggests that they may have married in the early 1870s, although no record of the marriage has yet been found.

Census records and the membership lists of the Northumbrian Small-Pipe Society confirm James’s identity and address at this time, and page 317 of Kelly’s Post Office Directory for 1894 confirms this address and his profession.

In 1877 he was founding member (along with the antiquarian Dr John Collingwood Bruce, and others) of a committee established to encourage the playing of the Northumberland small-pipes and which instituted a series of annual small-piping competitions. This competitive element is still a feature of modern Northumbrian piping. A letter from Bruce, preserved in the Collection, shows that James had sent Bruce a copy of his “brief instructions for playing the small pipes”prior to the inaugural meeting of the committee. 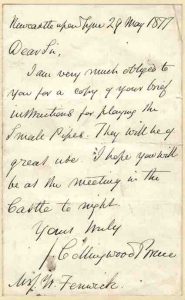 It is possible, but presently remains only speculation, that James Fenwick might have been the friend of James Reid from Newcastle who visited London and met Charles Keene. In 1876 Keene wrote, “I heard a beautiful player once in London, a friend of old R__’s from Newcastle, but forget his name. He spoke of several gentleman pupils he had – a short neatly-dressed jolly looking little man; I fancy I heard he was a shoemaker.”

Apart from the shoemaker reference (about which Keene seems unsure) the description might fit James. As a tailor he might be expected to have dressed neatly, and the material in his collection strongly suggests that he was preparing carefully structured tutorial material by the 1870s, which implies that he may have had pupils. The effort and cost involved in producing printed tuition material suggests structured and repeatable teaching provided for more than one student.

In October 1883 the Newcastle Courant published a letter from James seeking any information about the piper and musician John Peacock, who had written the book of pipe tunes published by William Wright in Newcastle in c.1800. This suggests that James was actively working on the historical context of his manuscript collection; some of the music provided in copies made by Cornelius Stanton seem to draw upon an early but so far unidentified source of Peacock’s music.

James Fenwick died in 1907, after which his collection passed to Richard Welford, the Newcastle historian and antiquarian, and then in 1920 to C.O.P. Gibson of Bywell. It is likely that Welford acquired a collection of loose papers, and that it was he who had it bound into the book form in which it now exists, recognising it to be a very significant resource; it was described in the sale of books in 1920 as “unique”.

The piper and pipe-maker G. G. Armstrong of Stocksfield, probably in the second quarter of the 20thC, copied parts of the Fenwick collection into his own manuscript collection (now in the Morpeth Chantry Bagpipe Museum); this included Elizabeth Oliver‘s copy of the variations on the tune “Maggie Lauder” which she learned from her father Robert Reid. Armstrong specifies the source as “J. W. Fenwick’s collection of music”. This version was published in the Northumbrian Pipers’ Society Third Tune Book, in 2002.