Several 19thC pipers in North Shields are known by name, and some aspects of their lives and their repertoire are known. It is more difficult, though, to establish whether and how these pipers may have interacted. Some of them had obvious family connections, and newspaper reports show that some occasionally played together at events, but confirmed relationships beyond that remain obscure.

It is possible, however, to tentatively propose some relationships based upon the twin factors of contemporaneity and proximity, essentially using the questions ‘when?’ and ‘where?’ to establish at least the possibility of relationships between people, and perhaps even suggest probabilities. In order to do this it is necessary to define the times when individual pipers were definitely – or at least almost certainly – living and/or working in North Shields.

Using census records, supported by information from parish records, newspaper reports, advertisments, and directories it is possible to devise the following simple chart listing nine pipers whose time in North Shields can be defined with reasonable certainty; it covers the 76-year period from the return of the young William Lamshaw from Militia service in c.1798 until the death of James Reid in 1874 (click to enlarge):

Please note that in this chart; (a) the bar for Lamshaw stops in 1805, although he actually died early in January of 1806, and (b) William Green’s presence is assumed because it is known that he played regularly in the area and his son Thomas was born in North Shields, but to date no evidence of his residence anywhere during this period is known, and (c) the length of the bars indicates presence in North Shields, not lifespan.

William Green was Piper to the Duchess from c.1806. He played at the opening of Tynemouth fairs, often with his nephew Robert Nicholson, who deputised for him in 1811 in Tynemouth when William had to play at the opening of Ovingham fair on the same day. It is thought that he was living in North Shields during this period because his son was born in North Shields in c.1823-6. He may have lived in North Shields for several years after Thomas was born, but no evidence of his actual residence has been found before he appears in the 1841 census as the landlord of the Seven Stars Inn at Buller’s Green in Morpeth.

Prior to that date, though, advertisements were placed in 1828 and again in 1832 for letting the Seven Stars Inn. Directories show that in 1827 and 1829 the landlord was John Dees, and in 1834 the landlord was Robert Richardson. This shows that William Green only became landlord in or after 1834, in which case he may have lived in North Shields until then.

If William was living in North Shields until c.1834, then the time he and Robert Reid were in the same town increases to 28 years.  It is unlikely that the Piper to the Duchess and the foremost maker of small-pipes, both in the same town, would not have known each other.

A further piece of evidence might support this possibility. William Green’s obituary in the Alnwick Mercury of 2nd April 1860 specifically mentions his role in “extending the compass of his favourite instrument”:

It is at least possible that William Green and Robert Reid worked together during these years in North Shields to developing an extended chanter for the small-pipes.

Born in 1813 and 1814 respectively, Thomas Chisholm and James Reid were close contemporaries with only five months difference in their ages, with James Fenwick being about ten years younger.

All three were together in North Shields for at least the nine years between 1841 and 1849; in 1841 Thomas Chisholm was 28 years old, James Reid was 27 and James Fenwick was 18. In at least the early part of that time it is known that James Fenwick lived within about 200 yards of where James Reid lived, and Thomas Chisholm was living in Tyne Street which is less than half a mile away.

Thomas Chisholm was a tailor, and by 1834 appearing in Pigot’s directory in his own right. James Fenwick was described in the 1841 census, and in all subsequent census and directory entries, as a tailor.

James Reid was taught to play pipes by his father. It is not impossible that Thomas Chisholm, his close contemporary, was also taught by Robert. They may have known each other as children, or even have learned together.

It is an intriguing thought, although a purely speculative one, that the young James Fenwick, living close to the Reids, might have learned piping from them and consequently met Thomas Chisholm, another talented piper who had learned piping alongside James Reid and who then introduced James Fenwick to the tailoring profession.

Note also that it is within this period that Elizabeth Reid was also learning to play small-pipes. 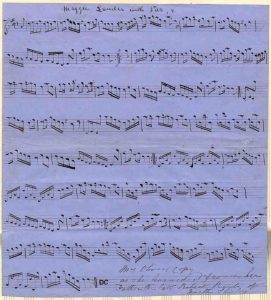 Born in 1818, if Elizabeth was taught this by her father then she must have been a skilful piper by the age of nineteen, when her father died in 1837.

Although it is known that she went to live in Neath after her marriage to John Oliver in 1853, it is assumed that up to that time she lived in North Shields. If this is the case, then she was an active and competent piper, and living in the same environment as her slightly older brother James … at the time he may have known both Thomas Chisholm and James Fenwick.

This raises the possibility that Elizabeth Reid was a member of a group of four very competent pipers together in North Shields consisting of Elizabeth and her older brother James (both children of the foremost maker of small-pipes), along with her brother’s close contemporary Thomas Chisholm, and James Fenwick (five years younger than Elizabeth).