Drawing on reliable contemporary evidence and upon recent research, it is possible to associate a number of significant pipers with North Shields and Tynemouth, as the following summaries show.

JAMES ALLAN, the notoriously dissolute and dishonest piper, visited North Shields frequently and lived there for periods during his later life. Andrew Wight, the original author of The Life of James Allan (various editions, 1818-28), specifically locates Allan in North Shields on several occasions. His account indicates that Allan spent a considerable time in the town, especially in his later years. The dating of events in Wight’s book is difficult but the historian Eneas Mackenzie, the publisher of the early editions and the later revised biography, states in the preface that Wight lived in the same lodging house as Allan in North Shields in 1792 and was relating Allan’s own account of events in his life. Historical evidence corroborates that Wight was probably living in North Shields by 1791, and certainly from 1794 at the latest, until his death in 1832. In the report of Allan’s trial and sentencing in the Newcastle Courant of 6th August 1803, Allan is specifically identified as being “of North Shields”.

WILLIAM LAMSHAW (the Younger): served in the Militia as a youth, and subsequently as ducal piper from c.1798/9 until his death at the age of 25 in 1806. Will Lamshaw played to great acclaim at the opening of the first of the Tynemouth fairs re-instituted by the Duke of Northumberland in 1804, and at subsequent fairs. Recent research has revealed that his family lived in North Shields and suggests that the well-recorded location of his death (in Toll St) was probably his parent’s home. He is buried in the churchyard of Christ Church in North Shields and the parish register of his death describes him as a cooper.

His father, also called William but not known to be a piper, was a boatman working for James Richardson, the owner of a North Shields brewery, and died in an accident in North Shields harbour in 1817. The possibility exists that after being “discharged, sick” from the Militia in 1798, the still young and single William returned to his family home, and was offered work by his father’s employer, a man known to be “possessed of a benevolent and feeling heart (whose) truly kind and friendly manners endeared him to all classes of the community“.

WILLIAM GREEN: was piper to the duchess of Northumberland from c.1806 until 1849, after serving in the militia, and played regularly in North Shields and Tynemouth to open the bi-annual fairs. In addition to playing at the fairs, as Piper to the Duchess he played at numerous events in North Shields such as the 22nd birthday dinner for Lord Algernon Percy at the Northumberland Arms as reported in the Durham County Advertiser of 24th December 1814, and at Burns Club Suppers in the 1820s. William’s place of residence has not been positively located for the years between him leaving the militia and becoming landlord of the Seven Stars in Morpeth by 1841. It is possible to state, though, that he was not the landord of the Seven Stars at Buller’s Green in 1827 and 1829, because Parson & White’s directory and Pigot’s directory respectively state that the landlord then was John Dees; nor was he at the Seven Stars in 1834 because Pigot’s directory of that year shows Robert Richardson as the landlord.  It is probable, however, that William was living and working in or very near North Shields when his son was born there in c.1826, and possibly until after 1834.

William Green’s creativity as a piper was emphasised in his obituary in the Alnwick Mercury of 2nd Apil 1860, which includes the following statement: 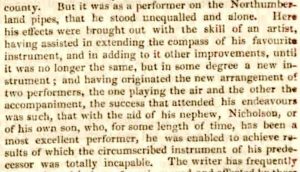 Although he retired as Piper to the Duchess in 1849, he continued to play. In 1857, for example, he played at Alnwick Castle with his son William Thomas Green and James Reid, when the Ancient Melodies Committee of the Society of Antiquaries of Newcastle upon Tyne presented a report to the Duke of Northumberland.

ROBERT NICHOLSON: was William Green’s nephew and was his assistant as Piper to the Duchess. Nicholson is reported in the Newcastle Courant of 11th May 1811 as having deputised at the April 26th Tynemouth Fair because William Green was playing at Ovingham Fair on the same day. At age 18, in 1816, his playing is enthusastically compared to Lamshaw and Fitzmaurice, and it is claimed that he is likely to become the equal of Allan, Green, Cant or Courtney. This report also states that this was his first solo performance (despite his 1811 performance) which implies that he had habitually played with William Green. Several newspaper reports mention the Duchess of Northumberland’s pipers (in the plural) and it might reasonably be assumed this refers to William Green and Robert Nicholson playing together. Robert Nicholson was probably a shoemaker by profession, but later helped his wife run the Black Swan Inn in Morpeth. When he died there on 11th October 1842, The Durham County Advertiser reported his status as a piper:

William Green’s obituary (see above) stated that he originated a new technique of duet playing with his nephew Robert Nicholson and also with his son, William Thomas Green.

ROBERT BEWICK: the son of Thomas Bewick, the engraver, was taught piping by John Peacock when quite young. Both he and his father, Thomas, had strong links to Tynemouth and North Shields. The Bewicks are described on a separate page of this website.

THOMAS SNOWDON CHISHOLM: Recent research revealed this hitherto unknown Ducal piper. Born in 1813 in North Shields, he was a master tailor by profession. Pigot’s Directory of 1834 lists him living and working in Union Street in North Shields. He was appointed Manorial Piper in Tynemouth in 1844. He moved to Newcastle c.1850, living and working first in George Street, then in Blenheim Street until his death in 1859. In November 1857 he played in St Nicholas Reading Room at a lecture about Sir Walter Scott, at which he was encored.

In the Newcastle Journal of 16th November 1844 it was announced that Thomas Chisholm had been “appointed Piper to His Grace the Duke of Northumberland for the Manor of Tynemouth”. This was during the tenure of William Green as Piper to the Duchess, but at a time when he was living in Morpeth and landlord of the Seven Stars at Buller’s Green. Newspapers reports between 1844 and 1848 name Thomas Chisholm playing as the Duke’s piper at various events in Tynemouth and North Shields, and in 1848 at Newcastle: 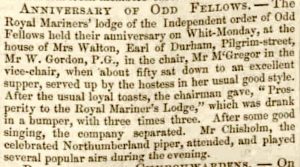 WILLIAM THOMAS GREEN (usually now known as Thomas): Born in North Shields in c.1826, son of William Green, who he succeeded as Ducal piper from 1849 until 1892. In 1879 it was reported that he had played at the opening of North Shields Fair for 31 years in succession, which implies that he played for the fair each year since 1848. He also played at the dinner which accompanied the fairs.

By 1879, the fairs had all but lost their original function as trading fairs and markets, and were described as “pleasure fairs”; it seems likely that Thomas took this a little literally, as it is reported in the Shields Daily Gazette for Saturday 8th November 1890 (the morning after the opening of the fair) that he was fined 2/6d (two shillings and six pence, or 12½ new pence) in the North Shields police court, for drunkenness.

As with previous Ducal pipers he played at a wide variety of formal and social events in North Shields, including the opening of the Sailors’ Home at the New Quay in 1856, the dinners of the Courts Leet and Baron, and on 2nd December 1885 a music festival in the Tynemouth Aquarium (later known as The Plaza) at which he was encored.

CORNELIUS STANTON: hitherto chiefly regarded as one of the four known owners of a copy of William Wright’s published collection of John Peacock’s tunes, and as a tune collector. Born in 1799 in Gateshead, as an adult he lived with his father in Cumberland Row in Newcastle. He appears not to have married, and after his father’s death in 1853 he moved from Newcastle to Tynemouth, where he lodged at No.61 Front Street until he died in 1866. He is known to have been an ardent collector of traditional tunes and particularly Northumberland pipes music, and the Newcastle Courant of 3rd June 1881 stated that there were pipe tunes in his manuscript collection that would otherwise have been lost to pipers. In the Courant of 21st April 1882 he was described as “an amateur performer of no mean ability upon the Northumbrian small-pipes”.

Cornelius Stanton now attains new significance in the light of the contents of the Fenwick Collection, because Fenwick gives him as the source of many of the manuscript tunes. It is clear that he had access to versions of tunes that he attributes to John Peacock but which differ significantly from the published versions. He would have been eighteen when John Peacock died and it is tempting to speculate that he may have been taught to play pipes by John Peacock, who was a working musician in Newcastle. It is known that Peacock accepted pupils because it was he who taught Robert Bewick to play.

The Reid family and the Northumbrian Small Pipes Society are described on separate pages in this website.